The Reverend James Fordyce was quite a popular author for a while, and like Clara Reeve, he would be thoroughly horrified by how many modern women just aren’t into being hooted at in the street and treated like mobile vending machines for sexual favors. Reverend Fordyce was the author of the popular-in-its-time Sermons to Young Women, which he originally published in 1766. What does Fordyce tell women? Mostly, he tells them to be modest and passive, that their only real purpose in life is to attract attention from men, and that being attractive was good. On page 90, for example, we get “Wisdom is never so attractive as when she smiles,” which may well be 1766’s answer to “Cool story, babe, now go make me a sandwich.” Had custom tee-shirts been a thing in the 18th century, no doubt this would have been on many of them. Of course, the Reverend Fordyce’s views on women were not particularly unusual for his time. Neither was his fear of the power of novels.

[T]here seem to be very few, in the style of the Novel, that you can read with safety, and yet fewer that you can read with advantage.–What shall we say of certain books, which we are assured (for we have not read them) are in their nature so shameful, in their tendency so pestiferous, and contain such rank treason against the royalty of Virtue, that she who can bear to peruse them must in her soul be a prostitute, let her reputation in life be what it will.

What can you say about stuff you admit you know absolutely nothing about? Well, you could always try nothing, but what would happen if we expected people to focus on things they actually know something about? Sermons might include “Things I Didn’t Know Were in the Bible Until Yesterday, When I Read It,” “Don’t Tell Your Stupid Friends You Can’t Go to Their Stupid Party Because You Are Sick and Then Post a Selfie of You at a Much Cooler Party Because Your Friends Might Just Be Reading Facebook at Their Stupid Party,” “Sometimes You Feel Like a Child, But Whatever You Do Make Sure You Don’t Abduct One,” and “Sonic Sunglasses – Can They Really Replace the Sonic Screwdriver?” Before some of you get angry, keep in mind that I apply this to folks like Sam Harris and Richard Dawkins in exactly the same way I apply this to folks like Fred Phelps and J. Fordyce. Sam Harris might give a talk entitled “You Don’t Need to be Religious to be a Right-wing Nutjub,” while Richard Dawkins might want to try “Seven Unbelievable Things I’ve Learned Hanging Out With White Supremacists.” Okay, now the rest of you can get angry.

I’m okay with the idea that some books are just awful, either because they contain nothing that I would consider substance or because they seem to be written entirely to spread what, to me, are disgusting ideas. For example, on one extreme are the books about a sensational but essentially unimportant event that somehow manage to reach bookstores less than a week after whatever event first hit the news. On the other, we’ve got books by Chris Hitchens or Mike Huckabee. Right in the middle, combining a complete lack of substance with a bucketload of bad intentions, we get things like the Twilight series. I would never recommend these books to anyone, and I would judge someone badly for liking some of these books. However, I get that these are all my opinions, and not everyone has the same opinions, and that having different opinions doesn’t automatically make other people evil.

So, I’m not going to argue with the Reverend Fordyce that some books are just bad. Instead, I’m going to say that his book in particular is bad. But you don’t have to take my word for it. Ask writer, philosopher, and women’s rights advocate Mary Wollstonecraft. In her book A Vindication of the Rights of Woman: with Strictures on Political and Moral Subjects, she calls the Reverend out by name, both for his bad ideas for his awful writing:

Dr. Fordyce’s sermons have long made a part of a young woman’s library; […] but I should instantly dismiss them from my pupil’s, if I wished to strengthen her understanding, by leading her to form sound principles on a broad basis; or, were I only anxious to cultivate her taste

[T]hese discourses are written in such an affected style, that were it only on that account, and had I no objection against this mellifluous precepts, I should not allow girls to peruse them, unless I designed to hunt every spark of nature out of their compositions, melting every human quality into female meekness and artificial grace. I say artificial grace, for true grace arises from some kind of independence of mind.

She quotes a section of Sermons to Young Women where Fordyce blames women for the way their husbands mistreat them, arguing that they aren’t as soft and modest and slavish enough for him. Just before the quote, she asks “Is not the following portrait–the portrait of a house slave?” and follows the quote with “I detect not a trace of the human character, neither reason nor passion in this domestic drudge, whose being is absorbed in that of a tyrant’s.” In response to another of Fordyce’s passages, she responds “I know not any comment that can be made seriously on this curious passage, and I could produce many similar ones”. 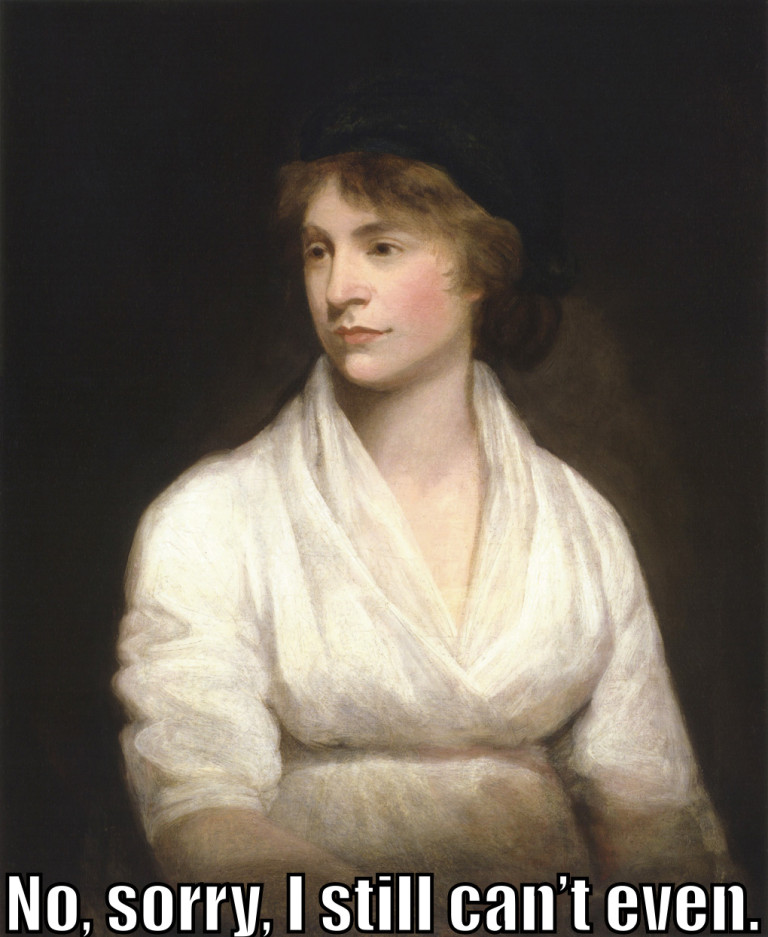 She goes on ripping into Fordyce for quite a few pages, and who can blame her?

If you happen run into him while you are in the 1700s and he tells you he has a modest etching collection, do not ask to see it!

How did the pervert do? His reference to the soul of a prostitute might just be his wishful thinking, but I think that counts as undermining sexual morality. That’s about it.

On the other hand, I think we should score Mary Wollstonecraft’s attack on this perv. She hits a lot more of the points, and rightly so.

Our next installment introduces us to Hannah More, who had almost as wide a range of skills and interests as John Ruskin. Like Ruskin, More felt that novels had the potential to open the eyes of the poor and oppressed to a larger world, but More and Ruskin would undoubtedly disagree on exactly what to do about that potential.

I’ll see you next time.