There are lots of very good reasons to panic. How about these?

This column will focus on the last member of our list, who has arms as muscular as an East German wrestler’s from all the hand-wringing they do. History has shown that people who have, to the generations that followed, the least to worry about are the ones who worried the most. Or, at least, they are the ones who worried the loudest. Why? I’ll let Raphael’s painting of Leonardo da Vinci cosplaying as Plato and quoting Abe Simpson give you one possible reason. 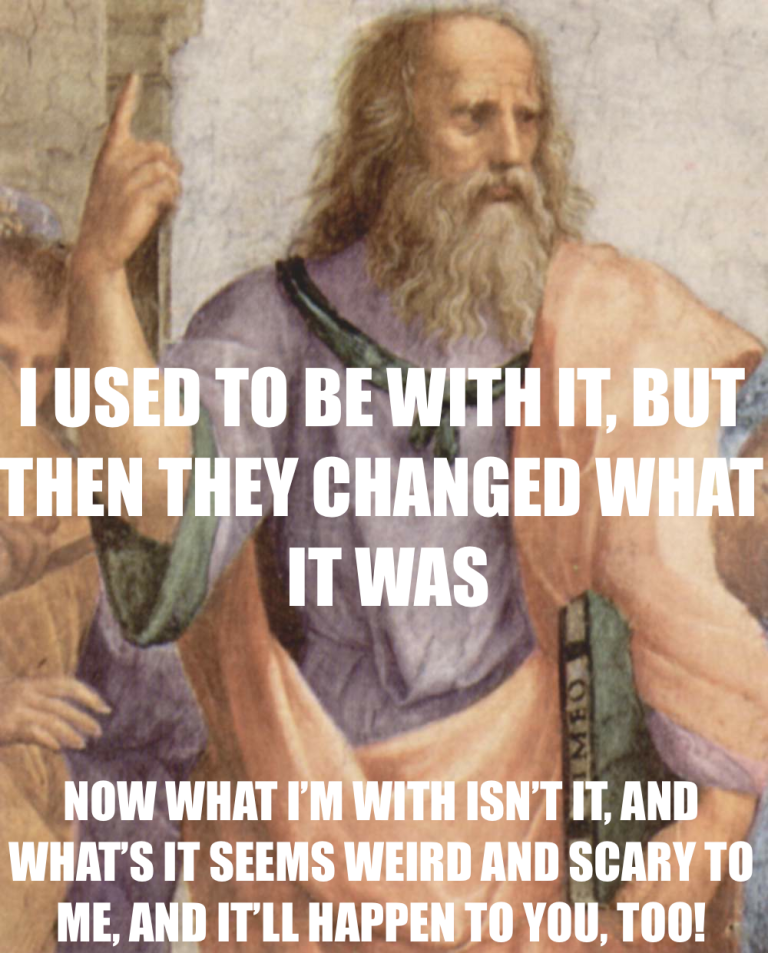 But not all of these whiners are upset just because they aren’t trendy teenagers anymore. Several of the people we’ll cover are outraged at least in part because something they enjoy has become popular,1 or at least has become popular among the “wrong” sort of people (women, the poor, etc.). Some of them see a genuine threat to their way of life, or at least to their pocketbook. Some, on the other hand, feel that both complaining about the kids these days and finding imaginary threats to protect those kids from are great ways to get attention, power, and profit. In at least one case, at least some of the blame falls on America’s shoddy mental health care system. Finally, taking something from all of the above reasons, we have members of religions whose core beliefs include an unreasoning fear of anything even remotely enjoyable.

Naturally, we can find quite a few ministers saying absurd things about mostly harmless trends. But we can also find cranks, politicians, poets, musicians, and philosophers in the mix. There are also some science journalists who don’t know much, if anything at all, about good science, as well as a few actual scientists who are willing to do sloppy or even dishonest research to prove that their crazy opinions about life have some basis in fact.

As it turns out, very few of these folks were particularly creative in their attacks on imaginary moral threats. Steven Starker, in Evil Influences: Crusades Against the Mass Media, gives a list of charges that are regularly leveled against mass media of all kinds.

I’m not really familiar with Steven Starker, but this list seems to be pretty good. I should, though, add a few others that we’ll see.

Sometimes people will focus on one or two of these, but a few of the people we’ll meet try to pack in as many of these as possible. None of their arguments are that good, so if you don’t have quality, you might as well go for quantity.

We’ve got quite a lot of ground to cover – as you can see, even Professor Harold Hill has trouble keeping up with everything people can be scared of for no good reason. Given enough time, we’ll get to all the things he mentions, but for now, we’ll start with a capital N, which rhymes with pen, which is used to write novels.

👉🏽 “The Kids These Days and The Novels”

1: Yes, these folks were hipsters before being a hipster was cool. Except that, apparently, it was already cool back then. This probably says more about our habit of mocking hipsters than anything else.